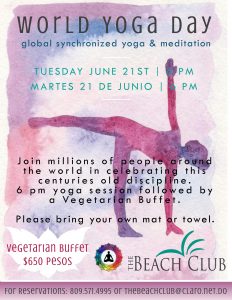 Yoga is a 5,000-year-old physical, mental and spiritual practice, which aims to transform both body and mind, with origins in India. In 2014, The United Nations General Assembly declared June 21st as the International Day of Yoga.

The declaration of June 21st as International Day of Yoga became official when the  Indian Prime Minister Mr. Narendra Modi made an address to UN General Assembly wherein he stated: “Yoga is an invaluable gift of India’s ancient tradition. It embodies unity of mind and body; thought and action; restraint and fulfillment; harmony between man and nature; a holistic approach to health and well-being. It is not about exercise but to discover the sense of oneness with yourself, the world and nature. ”

Join us to celebrate this special occasion at Sea Horse Ranch with an observance at The Beach Club, with a free sunset Yoga session on the lawn, followed by a vegetarian buffet at the restaurant.