An art exhibition of the works of painter Salomón Santos is currently on view at the cultural center of Sosúa,  Casa de Arte. The exhibition is free and open to the public and is on display until April 7th. 2017.

The exhibit consists of paintings of the sea life of Sosúa Bay. Salomón Santos depicts the colorful underwater world of corals, fish, crabs and lobsters. His work also chronicles the life of local children, fisherman, and addresses the environmental concerns of pollution in the ocean. He is concerned with plastic that carelessly makes its way into our rivers, and ultimately the ocean.

The official opening was held February 23, and attended by artist Salomón Santos, Casa de Arte Director Adolfo Faringthon, Secretary Yuni Mari Rosario Hernández, and prominent Sosúa residents such as Félix Corona (municipality press officer), Omar Messon (the chairman of the Sosúa writers collective) and councilors, among other colleagues and family of the artist. 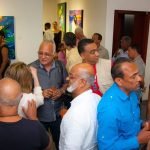