Snowing in the Caribbean?

It is unusal, but not the first time that the Dominican Republic has seen snow. Park rangers at Pico Duarte, the highest peak in the Caribbean, report that cold spells can bring a light dusting of snow, which usually melts quickly after hitting the ground.

Wet snow has also been reported in the high altitudes of the Sierra de Bahoruco National Park, where peaks reach as high as 8,700 feet above sea level.  Bahia de las Aguilas, a beach famous for its palm trees and pristine, white sandy beach is 30 minutes away. 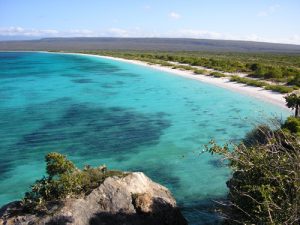 Don’t let a little light snowfall in the Caribbean mountains deter you from your sun-seeking vacation, though. The Dominican Republic boasts an average air and water temperature of 80 degrees farenheit, with abundant sunshine year-round.