Professional Dominican tennis player Victor Estrella Burgos will participate in an exhibition match at Sea Horse Ranch Tennis Center on Friday, December 16, 2016. The Round Robin Tournament will include young players that have trained at the Tennis Center at Sea Horse Ranch, including Nick Hardt, William Kirkman and Nicolas Moreno, all from Sosua, Dominican Republic. 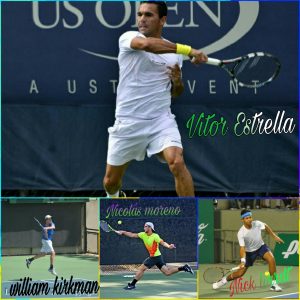 The event is free and open to the public, tennis fans and spectators welcome. The exhibition matche will be held from 3:30pm – 7:00pm at BTT Tennis Academy at Sea Horse Ranch Tennis Center, on Friday, December 16.

In 2014, Estrella became the first Dominican to reach the top 100 in the ATP rankings, later that year becoming the oldest player, at 34, to make his main draw debut at the US Open. He also became the first player from his country to play in the Grand Slam championship’s main draw.

The achievements kept coming and coming, but the best came in February 2015 in Quito, when he won five consecutive matches to take the title. In July 2015, he also reached a career best No. 43 in the Emirates ATP Rankings. As a 35 year old, he won five more matches in Quito to become a two-time ATP World Tour champion.

From Santiago Los Caballeros, Victor Estrella has seen how his historic career has generated interest in tennis in the Dominican Republic, and he wants to make sure he’s not the first and the last player from his country to win titles and break ATP World Tour records.

Please join us this weekend at Sea Horse Ranch Tennis Club to watch this exciting tennis star compete against the younger generation of local, rising talent.